Touring with a Band of Brothers
Ted Moon's Journal

Hello all, I've been back for about a week and half now and a lot has happened but I thought I'd close the trip w/ one final note. This is really more for me but if you find any of this interesting, then that is great.

Our last full day in Europe was a day at Zell Am See and Kaprun, both in Austria. This is where Easy company got the dream assignment of getting some much deserved R&R as well as get ready for a possible jump into Japan since the war was still raging on there. But to do it in such beautiful surroundings that look like something out of The Sound of Music is not bad duty for guys who lived in foxholes for weeks at a time. It is a big tourist attraction and I spent the day walking around and trying get songs from the Sound of Music out of my head as I looked around for souvenirs. The edelweiss is on practically everything there and Admiral Von Trappe's rendition stayed in my head for several hours annoyingly.

Neil and Walt did keep their perfect record of finding good places to eat w/ yet another discovery - this time a quick pasta/schnitzel place. Finally the weather was nice that we could sit outside. We visited the hotel that served as Colonel Sink's regimental HQ overlooking a beautiful lake. Incidentally, that is where Jack participated in a jump to commemorate the anniversary of the D-Day jump. It was also the first time that the US Army attempted the HALO jump (high altitude, low opening) that is so common today. Paul and Earl were trying not to get arrested while enjoying their easy duty.

Later that night we had our final dinner as a group. The tour had a private party set up at Hitler's Eagle's Nest and it was a formal event. I had to pull out the sport coat I had been schlepping everywhere for this one dinner but it was well worth it. Historian David Harper led us into these high powered buses that climbed up 6,000 feet to the top. It was a little scary considering we were rushing up a narrow and winding road up without any guard rails. Going up was one thing, I was just hoping the brakes worked for later that night coming down. At a base camp like landing prior to the final ride up, we got out and took pictures before boarding the "Golden Cell", a beautiful gold plated (actually bronze) elevator that took us to the building that is the Eagle's Nest.

It was a breathtaking view from up top and though our heroes had never actually been up there back in 1945 (only officers and other selected folks got to go up there and enjoy it), it was better late than never. We saw Eva Braun's little tea room where she entertained her guests, the patio, and then sat down at the main area for the dinner. Prior to sitting down, our tour guides, Chris and Jake, talked about the epilogue of Easy company since they were first deployed - over 100% casualties with many men being wounded several times but a great record and being the tip of the spear of winning the war. They mentioned how we were the second group to take the B of B tour, but we will always be remembered as "3rd Platoon", in honor of Paul and Earl. Paul mentioned how he has been on many tours over the last few years since the book and the movie, but he felt this was easily the best group. Earl talked about how it was an honor to have us join them (although I'm sure we were the ones all honored to have accompanied him) and Jack talked about the legacy of the 101st.

Our group was also exchanging numbers and emails and taking pictures together (something that had not been happening since most of us wanted pictures just of the sites, ourselves, or ourselves w/ the vets). We, too, had become a nice cohesive group. I then went outside to climb up to the very top of the mountain and then made a call using my Nextel i2000 phone. Caught up in the moment, I also let two others use my phone to call. yes, we have coverage! btw, what a great selling job of Nextel!

On 5 hours of sleep, we bussed out the next morning to Munich to catch our flight back to Atlanta. Because the seat assignments were done alphabetically, like most of the trip, I was close to Earl McClung, scheduled to sit next to him. I was looking forward to that. At the gate, Jack and I (since I was always his partner in crime) noticed a Jack Agnew Special - a tall redhead flight attendant for our flight. On the plane before takeoff, I slipped her a note hoping she would make an announcement about having these three heroes on the flight - like our outbound flight two weeks prior. She thanked me for the note and then had Jack, Earl and Paul come up for a free first class upgrade. She also made the announcement which then led to a bunch of young GIs going home to swarm to these guys for autographs.

Earl made it back to the coach cabin to see how we were doing. Noticing the food back in coach, he rubbed it in with a "My God! Is that what you're eating back here?!!!" Jack, as he had been doing for most of the trip to young ladies across Europe, pinned a 101st Airborne pin on the flight attendant while she was actually sitting on his lap! She came back to thank me again for pointing that out and I put in a good word for Jack, "you know, he's a hell of a catch... get his number!" Jack knows how to finish a trip.

In case you're wondering, Jack went on to become an electrician and worked on telephone lines for many years before retiring outside of Philadelphia. Paul went on to work for the US Postal Service outside of Kansas City and Earl became a game warden back in his native Washington state before moving to Pueblo, CO a few years ago when his wife needed to take care of family members.

Jack, as a long time member of the NRA (my only beef against him) comes to DC often to visit their HQ so I may get to see him sometime this summer. Earl, a huge Denver Broncos fan who can tell you even when a player got drafted, I may see for a game. I hope to see Paul at a reunion that is being planned by a couple from Denver. The book about Jack's unit is now available on Amazon - called "The Filthy Thirteen." Jack's buddy Jake McNiece cowrote the book.

Back here in DC, working and trying to deal w/ a torn tendon on my finger I hurt playing softball the day after I got back which required stitches. It is hard to keep my mind from wandering back to Holland or Normandy or even the bus that seemed like home for two weeks.

I got 15 rolls of film developed and then reviewed 9 hours of video I shot (planning on editing down to a 2 hour documentary). If you haven't or would like to see some, I can send some to you. I will just show you perhaps my favorite since I don't want to kill your computers. 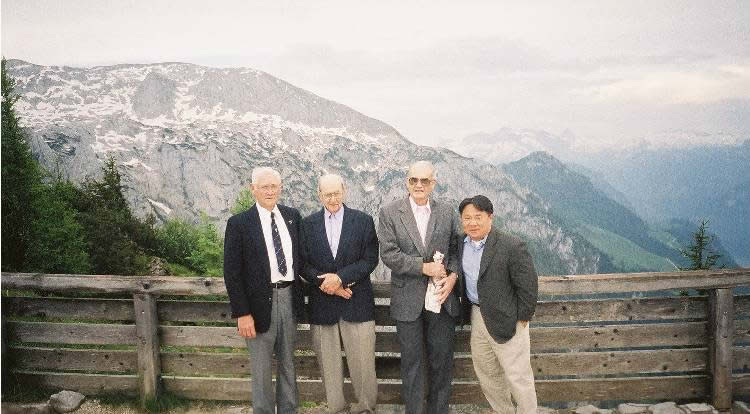 From left to right: John "Jack" Agnew, Paul "Buck" Rogers, and Earl "One Lung" McClung - at the Eagle's Nest. Note Earl holding the 60 year old bottle of calvados given to him by the mayor of Carentan back in France. We uncorked it and drank it that night. It is evil stuff.

Thanks for reading,
Ted 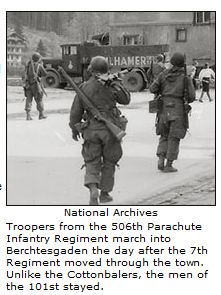