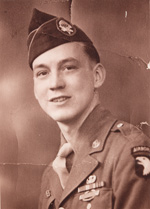 The following was an interview conducted by Reg Jans of Belgium.  Thank you for sharing the interview with all of us.

Reg:  Don, why did you sign up for duty while you could have lived a normal teenager life?

I wasn't alone in joining the military at age 17, many men, and women, joined the military at that age, some before and many after the sneak attack on our country through Pearl Harbor.  The attack on Pearl Harbor wasn't just an unprovoked attack, it was an atrocity committed against every American.  Our country was thrust into an undeclared war designed to destroy America, our way of life, to conquer our people and enslave the world.  We Americans were given no choice.  We were all in a war for our very lives.  Nearly all of my friends including my older brother took blankets from their beds and slept on the sidewalks that cold December night in front of their selective service boards; so they would be among the first to volunteer when the selective service board opened their office doors in the morning.  I had to wait until I was eighteen when I would be legally old enough to join at will. Where do you find patriotism like that today?  Too many people in the world want to share the harvest.  Few are willing to do the plowing.

Reg:  How did your parents feel about you signing in?

No responsible person or parent in the world wants to see their children go to war.  War is death and destruction whether one is the attacker or the defender, people die.  My parents grieved to see their children go to the world's defense, who else but the young can complete the job?  The enemy weren't unknown, we were well aware of who attacked Pearl Harbor and their intentions.  We also knew who the Nazis were and also their intentions.  Five days AFTER the attack on Pearl Harbor Hitler and Mussolini declared war on the United States .  The U.S. DID NOT declare war on the Fascists.  Again we were left with no choice in the matter.  I have been asked by many, mostly by the Germans during the war.  "Why are you Americans here?  Why are you fighting in Europe?"  I answer. "We were invited."  (by Hitler.)

Reg:  You fractured your leg in training.  This really saved your life?

Actually I fractured my right leg, not quite a full break.  As a result I could not immediately complete my five jumps to become a qualified paratrooper.  On the fifth and last jump, a night jump to qualify, the plane I was scheduled to jump from with my comrades crashed on Lawson Field, killing all aboard.  If I had not fractured my leg I would have been aboard that ill-fated plane.  One of the men killed was buried in his hometown, Howell, Michigan, which has been my hometown since 1967.  His grave is in the Lakeside Cemetery in the center of Howell.

Reg:  You were 19.  How did you cope with the killing of people with the same age?

No matter how intense the training it is very traumatic when the moment of first truth arrives and one finds himself face to face with an enemy he must kill.  If that moment arrives in milliseconds one reacts to the intense military training and pulls the trigger before he has time to think or evaluate the situation.  If the enemy approaches and one watches his arrival for moments or minutes, his home training since birth of "Do good unto others" is very strong and a mental wrestling of "do or don't" takes place, and could get one killed.  Once past that first infinitival mental adjustment the job becomes easier.  I no longer shot at or killed people, just uniforms.  If one had a round helmet, he was a friend.  If one had a square helmet, I killed that uniform, not people.  Before my time in Normandy came to an end my attitude was that of the hunter and the rabbit.  I was the hunter and the Nazi was the rabbit.  I hunted him and he was running and hiding from me.  I kept that attitude to the end.  In returning home there is little or no adjustment of "Kill or be killed" that attitude is shed with the uniform and loved ones take the place of what had to be done.  True, one may be restless, I was, and I traveled for several years, working at a hundred different jobs around all America. I gained immense knowledge from those travels and multitudes of jobs.  However, family love is strong and eventually one will grow out of his experiences and return to the young man who left home so many years ago.

Reg:  What took you so long to start writing about the war?

I began Currahee in 1958, completed Currahee in 1962 after 4 years of writing.  Placed it with Houghton Mifflin Publishers 1965.  Currahee was scheduled to publish in 1966 but Reader's Digest bought sub rights and asked if I would wait one year so Reader's Digest could bring their publication out at the same time as Houghton Mifflin's hard cover.  I agreed on condition that both publications would come out 06 June 1967.  My agreeing to wait one year was to my benefit.  I appeared on TV's "Today" Show with Hugh Downs 06 June 1967.  The Israeli War broke out that date and Currahee sold 5000 copies in five days.  A first time writer almost never sells 5000 copies in five years.  Within my first week I went into my second printing.  Currahee eventually sold in fourteen countries.   What took me so long?  I came out of nearly three years of a world war with one year of constant close in combat fighting with most of my comrades killed or severely wounded, in severe weather conditions and discharged at the age of twenty.  Not old enough to legally buy a beer in the USA.   I did not finish the tenth grade of school, I had to go to full time work at age 16 to help out at home, Depression days.  The war does something to people who have survived heavy combat for one year.  I took flight training, became a licensed pilot, bought a plane, traveled America for several years and worked at almost every job imaginable, gained a lot of practical experience, knowledge, abilities and talents.  I returned home to Michigan, married and had a family to support, five children and a wife.  Only when my children became old enough to ask, "What did you do in the war daddy?" I felt I had to write my experiences for them so they would understand when they became of age.  I did not write my books for the public or for publication or for sale.  I wrote my books for my children.  Without a full formal education I did not know a verb from an adverb, and still don't.  I didn't know how to type and taught myself on a second hand typewriter while writing in the meantime with a pen and pencil.  Only when several close relatives read my manuscript and became impressed, they suggested I publish my manuscripts.  Without formal education I could not write from education, I wrote from my heart.  Without formal knowledge I was lost in an ocean trying to get published.  How does one go about it?  Who does one contact?  What formalities does one have to follow to contact such high people as publishers?  In the end I did it.  I became the very first American enlisted man in America to publish books on the airborne in World War Two.  Since then many have simulated me and even "borrowed" from my writings.  Especially one well-known writer of American airborne.  During my writings I lived with my wife, Twyla, and five children in a very small two bedroom home, worked two full time jobs and wrote my first book at the same time.  At times I got only ten hours sleep total, in an entire week.  THAT is what took me so long.

Reg:  Has writing about the war become some kind of therapy for you?

Yes.  My writing has made me realize that war affects everyone that survives battle.  While writing I edited my own work.  I found that while writing about training or everyday life I had two or three typos per page.  While writing about actual combat I made from six to fifteen typos per page.  After, I could talk freely about the war to any who asked.  I would suggest that every combat person write completely, his or her full military experience, whether to sell or not.  No Shrink (psychiatrist) can ever, no matter his or her qualifications, can ever come close to a cure as one who freely writes of his turmoil.  While writing one must willingly face alone every minute detail of every day of military and combat.


Reg:  What can we teach our students about WW2?

I believe that every child be gaining at Kindergarten should be taught and learn that war is not the answer to all worldly problems; but, when threatened and war is unavoidable, every man woman and child in his country should stand 100% with his country, right or wrong.  If his country fails, right or wrong, what is left?  Ask the Jews at Dachau.  All students must learn the price of their freedom.  The blood, the suffering, the loss of body parts and mind, the loss of life, the loss of life from those who lived, they are never the same and his time spent in war will never be recovered in green pastures.  Combat personnel paid the full price for the freedoms everyone takes for granted.  Freedom is not, never was, and never will be FREE!!!  Someone pays the price.

Reg:  If you could do it all over ... what would you change?

Reg:  What do you think is best to keep the memory alive?

Reg:  What or which scene grabbed you the most?

The scene that grabbed me the most?  Probably was when I hit the ground in Normandy.  I picked up a handful of soil and said to myself.  "So, this is French soil, we have landed." I was in the hospital in Joigny, France.  The ward boy came in and told me the war was over.  America had dropped a huge bomb that had obliterated an entire Japanese city and the war was over.   I sneaked out of the hospital, had two glasses of wine, toasted my comrades.  "Here's to the last one.  Here's to the next one.  Here's to the ones we left behind."  I sneaked back into the hospital; and lying in bed I thought of the multi-thousands of lives that action had saved, on both sides, and the peace to come.  Thank you for this interview. 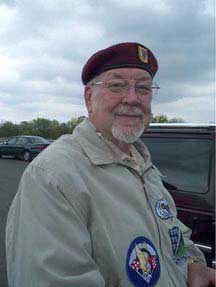 This website is dedicated to all Allied Paratroopers of World War Two. They became a 'Band of Brothers' who enlisted for a new type of warfare. They jumped into occupied Holland on September 17th 1944 like Angels from the Sky. We will honor their heritage.
First interview with Don Burgett