Frank was born on June the 18th 1925 at International Falls .

He was born and raised on a farm and he had eight sisters and brothers.

His father was from Poland and his mother was from Austria . Now they where farmers in the North of Minnesota.

Frank was the oldest child of the family Soboleski.

Frank wanted to become a Paratrooper and do the training at Fort Benning, Georgia .

After his training at Fort Benning he went to Fort McClellan , then he went to Camp Shanks wich was the port of debarkation to Europe .

From there on he went to Aldbourne with the rest of 2 nd Battalion 506 th PIR.

He Jumped in to Normandy and Holland during Market Garden and landed in Nymegen.

A lot of people never made it to the ground.

After Market Garden he went to Mourmelon where they got some rest for a short while.

In December 1944, Pvt. Frank Soboleski, of the 101st Airborne Division was fighting for his life in the Battle of the Bulge near Bastogne , Belgium . By his side was his "foxhole buddy" Pvt. Herb Suerth .

After Bastogne he went to Hagenau, a place in eastern France near the German border.

Frank went all the way with E-co to Berchtesgarden.

Frank was discharged in the beginning of 1946.

This website is dedicated to all Allied Paratroopers of World War Two. They became a 'Band of Brothers' who enlisted for a new type of warfare. They jumped into occupied Holland on Septmber 17th 1944 like Angels from the Sky. We will honor their heritage.
PVT. Frank Soboleski, 506th PIR 2nd Battalion 101st airborne. 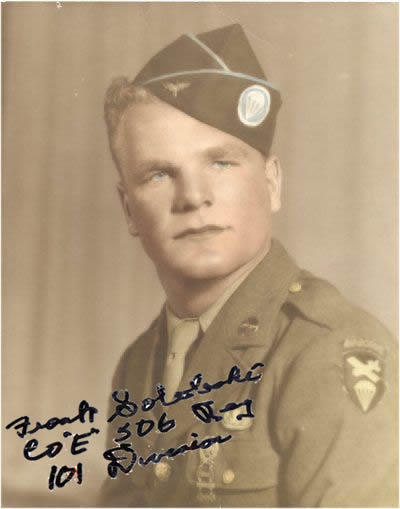 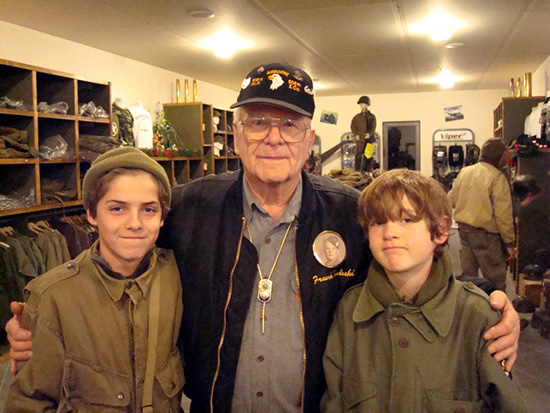 Winter 2007 Bastogne, Quote van Frank Soboleski: "You guys are doing a great job. Keep continuing, because YOU ARE OUR REPLACEMENTS !!!!!"