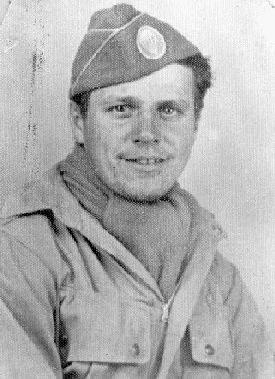 Walter, born in Cudahy , WI on 10 May 19 21, was one of ten children born to Anton & Mary Muszynski. He attended Holy Family Catholic School , the Cudahy Vocational School and graduated from Cudahy High School . Employment included the Civilian Conservation Corps, Northwestern Refrigerator Car Co. and Patrick Cudahy, Inc. meat packing plant. After volunteering for the service in 1942, Wally took part in the paratroop invasions of Africa, Sicily and the Anzio beachhead.

As a light machine gunner, twenty-three year old Private First Class Muszynski crossed the Waal River as part of the U.S. 82nd Airborne Division in one of the lead boats of the initial assault element during the Nijmegen bridgehead operation which liberated the people of southern Holland . As heavy machine gun and 20 mm flak fire greeted the forward elements, Private Muszynski quickly mounted his machine gun in the bow of his boat and directed heavy fire on the enemy dug in on the riverbank. Although fully exposed to enemy fire which wounded two of his comrades, Muszynski disregarded all possibilities of danger and remained at his precarious post. Upon reaching the opposite bank, Private Muszynski maintained a continuous cover of protective fire for the movement of his squad to the main dyke and from the dyke to the railroad embankment, accounting for at least twenty enemy dead and wounded. At times, he fired his machine gun from the hip while moving forward to keep pace with his squad. At the railroad embankment, heavy opposition from self-propelled 20mm flak guns was encountered and one of the nearby flanking guns knocked Muszynski's machine gun from his arms, destroying it. Unhesitatingly and without orders from anyone, Muszynski crept to within fifteen yards of the gun position directing devastating flanking fire on his platoon and knocked it out with a hand grenade killing four of the enemy. During this phase of action, Muszynski fell mortally wounded from enemy rifle fire. By his brave determination and valorous execution of his duties at the sacrifice of his own life, Private Muszynski set an inspiring example for all his comrades and contributed directly to the successful establishment of the vital Nijmegen bridgehead.

His remains were interred in the temporary U. S. Military Cemetery at Molenhoek, located four miles south of Nijmegen . He was reburied at the American Cemetery at Margraten , Netherlands which is under the constant care and supervision of United States military personnel.

The Polish Legion of American Veterans Post 26 of Cudahy honored and remembered Walter when they renamed the Post after him at a dedication banquet on April 12, 1960.

With many thanks to Kathleen Buttski.