An e-mail reached us and finally presented a result in this quest:

The photo of the "soldier unknown" may be of Trinity Cathedral, along a tributary of the Velikaya river in the city of Pskov, N.W. of Moscow. If you do a search on Pskov, certain sites contain photos of the cathedral. Also a map search will show the side along the tributary where the picture may have been shot. As far as the soldier I'm sure there was any U.S. soldiers of any kind in that area. Regards Shawn F. Smith

A simple keyword-search confirmed Shawns pointer: match this picture with the WW2 photgraph yourself...
The beautiful multi-domed Trinity Cathedral holds some of the many famous Russian icon paintinmgs for which the Medieval "Pskov School" of icon painting was famous. The little town of Pskov is situated North West of Moscow, close to Latvia and Estonia.
A second picture of a postcard, dated around 1910, again shows the typical domed Cathedral from a different angle, and the river 'Velikaya'.
The only question remaining; who is this soldier ? It's obvious that it's not an American (or western-Allied) soldier.
For now we are very satisfied this quest is partly fullfilled ! 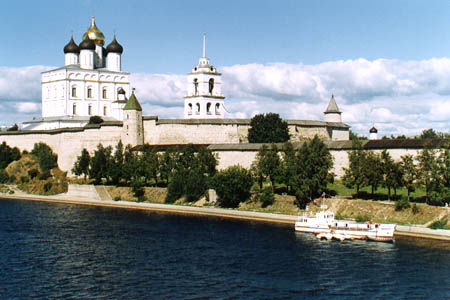 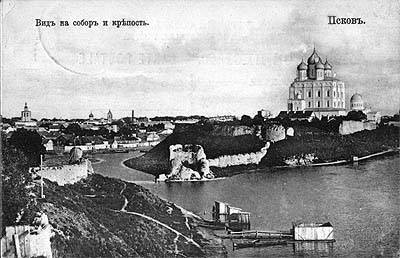