This picture was given to Jan van der Sanden. 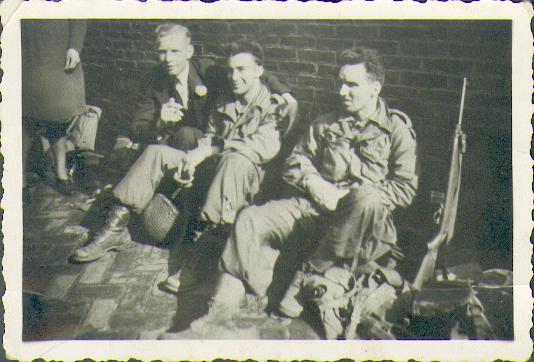 We see two Paratroopers in M43 Jumpsuits, one wearing buckle boots, the other one seems to wear the classic jumpboot. They are relaxing, the M1 Carbine set against the wall, webbing at the right hand side of the picture. A part of the Screaming Eagle patch can be seen,
The civilian man at the left has a flower (anjer) on his jacket; a sign of resistance that was common in The Netherlands (Prince Berhard used to wear an white anjer).
By the looks of the gear against the wall (both left and right) these two troopers could have belonged to a bigger groop kicking back for a few minutes.

What do we want to know ?

- Who has any more information on this picture. (Location, people etc...)
- Are these troopers of the 506th Parachute Infantry Regiment ?
Once again, we are counting on you guest of WW2 Paratrooper Webbase !