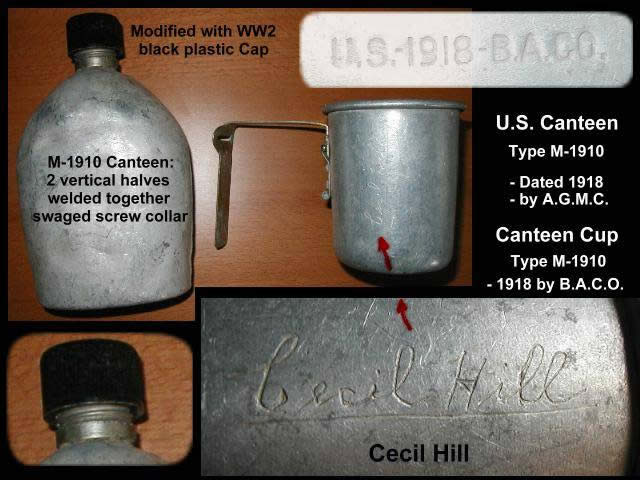 Why did I buy this WWI type of canteen, and not the horizontal welded, more common 1942/1943 Type Canteen ? The first Paratroops were issued 'early' War gear. 1941/1942 issued goods consisted richly out of World War I stock, being stored away for all those years.
Later the U.S. Army started cranking up the production pace to supply the huge mobilized Army with new gear. One of the old Army sayings of that era was pretty cynical; 'Remember that your weapon was made by the company with the lowest bid!'.

So the flat 'English' type of helmet (brain bucket) was replaced by the M1 helmet, the M1910 canteen by the new (and much quicker made) type of canteen. (There also was a rare enamel version). More new gear: gasmasks, new(er) patches (some combined), uniforms and jackets (like M1942 taker jacket or the Ike jacket -often created by 'field modification'-), even new boots in late 1944 (buckleboots...).

This particular canteen has a WW2 cap of black plastic material (modification). The original cap for the M1910 canteen is smaller. Together with the distinctive screw collar swaged to the neck and the fact that the WW1 era canteen was welded together vertically (in stead of horizontally like the WW2 canteens) this 'early' canteen can be identified pretty easy.

But my M1910 set had a surprise engraved on the side: Cecil Hill.

Could this Canteen Cup have belonged to Cecil E. Hill, service number 37515709, Sergeant in the 119th Infantry Regiment of the 30th Infantry Division (The Old Hickory)?
He entered the Service from Missouri and died on the 24th of September 1944.
Cecil is buried at Plot A Row 13 Grave 45 of the Henri-Chapelle American Cemetery in Belgium.
He was awarded the Purple Heart Medal. I am planning to visit his grave within the next months.

I have been in contact with Mr. Frank Towers, the Executive Secretary Treasurer and Historian for the 30th Infantry Division Association. He wrote me: 'that the combat files for the 30th Infantry Division have been lost in a disastrous fire at St. Louis, MO in 1973.'
He advised me to contact a special agency that may have more information on Cecil, so I wrote them a letter.

On the date that Cecil Hill died Frank Towers came up with this information:
'The history of the 119th regiment doesn't give any details of the action of that date. However, his unit was in the vicinity of Heerlerbaan, Schaesburg and Nieuwenhagen, while they were patrolling in the Siegfried Line area.'

Special thanks to Mr. Frank Towers. I was privileged to meet him in Normandy, on D-Day 2002. His blue jacket and cap, with the Old Hickory Logo, made him easy recognizable.