During Operation Market Garden (September 1944) Best was under siege and some of the most brutal battles fought by the 502nd PIR of the 101st Airborne Division took place in that area. (Also read the article: Florist Fighting for Best on this website).
After the liberation of the region the pub, 'Café Blauw Boerke' (Café Blue Farmer), situated in Best, was visited frequently by American and British Soldiers. In my mind I can see paratroopers brawling with other troops just to blow of some steam...
The sign displayed in this article was mounted outside above the door of this pub. It hung there for years after the liberation. A little while ago the sign reappeared, and led Bertus Hagelaar to do some research. 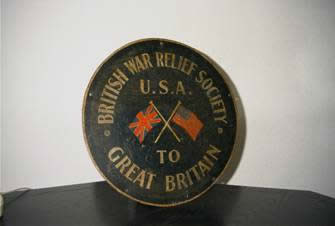 The text on the sign is: BRITISCH WAR RELIEF SOCIETY U.S.A TO GREAT BRITAIN

In the USA there where several, not military, charity organizations that tried to support the soldiers in Europe with welfare gestures. The B.W.R.S. U.S.A. to Great Britain was one.
These organizations raised funds for this purpose by selling souvenirs like mugs, glasses, cigarette-boxes, tie-pins, letter-openers, matchboxes etc. These products were made in the USA since 1939, and sold in Europe. 40% of the benefits went to the BRITISCH WAR RELIEF SOCIETY U.S.A TO GREAT BRITAIN, money that was spend on the welfare of the soldier as mentioned above.
The pictured sign was most likely send with the packages to the foreign dealers in these articles, thus recognizable as selling points for the Relief Society.

Some conclusions can be made: the sign could have been above the pub's door for years during WW2, since the Society started trading way back in 1939. Then again, would the Germans allow such a sign to be diplayed during the occupation of The Netherlands? One was not even allowed to display anything related to the Dutch Queen Maybe the sign was taken of the wall (no need to stress the German occupier), and remounted later. Or maybe it was only after Best was liberated that this sign was put above the door, making the pub an obvious location for GI's and British soldiers to spend some newly issued Guilders. Or... could it be it was there all the time since the start of the German occupation?
Any information would be of much assistance.

There were also other Relief Society's;

There is still a pub called Cafe Blauwe Boerke, in the Hoofdstraat in Best. I wonder if a paratrooper like Bob Carleton ever tried some Dutch beer there, in 1944...