At the very start of Operation Market Garden thousands of Allied Paratroopers jumped into our occupied country. Not only the Americans near Zon, but also the British Paratroopers on the spearhead of the invasion!
Every year this airborne landing is remembered at the Ginkelse Heide.
Similar to the annual event at La Fiere in Normandy, France, the 'modern' troops jump en-mass to commemorate history. During Market Garden almost 20.000 paratroopers of the first Allied Airborne Division jumped into Holland, accompanied by thousands of Glidertroops. 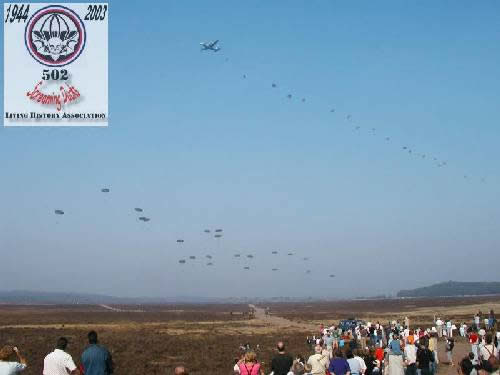 This year more than a handful of British Veterans made a spectacular jump once again, men from 77 - 83 years of age. These guys are genuine Red Devils!!

We all know the outcome of Market Garden. It didn't completely work out as Montgomery had in mind; it turned out to be 'a bridge too far'. But the efforts of the British and Polish troops have created the legend of an unbreakable fighting spirit.

We were proud to be able to witness this year's jump at the Ginkelse Heide. We came with our Jeep, WC62 and Command Car, in full force with 3 generations (from 7 to 80 years old). We gathered at the Army base and drove on to the historical fields in convoy. Sure, the 101st AB Division didn't jump on these fields, but some Americans did, accompanying the British and Polish troops.
First the veterans jumped, some with a tandem jump (1 chute, 2 persons). Then the big 'ships' came passing by.
Sticks of 12 and later 24 (using both doors and at a second interval). Wave after wave of troopers came down on various types of chutes. The first jumpers of one of the first sticks ended up in the trees because of the lack of concentration of their jumpmaster: they were given the command to jump too soon over the 3000 meter long area and the wind drove some of them into the trees on the opposite side of the road next to the Ginkelse Heide. I guess the guy who gave them the green light will have to provide a lot of beer to the unlucky troopers.
The general idea of the round parachute hasn't changed that much since WW2. It is still round, but a bit more controllable with the openings in the chute. Some types are a lot flatter than the WW2 type chute. Maybe next year a T5 chute at the 60 year celebration of Market Garden? 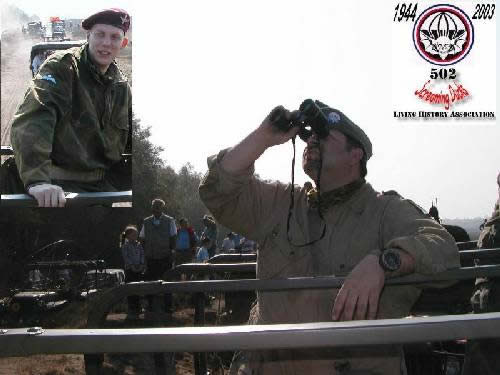 We joined Keep them Rolling after the jump and drove into Ede as true liberators.
Then we continued to tour the area around Wolfheze, turning back to Oosterbeek, visiting the Westerbouwing restaurant with its panoramic view over 'The Island' and the Neder Rijn, where we even picked up a stranded British Paratrooper with a defect motorcycle (BSA).

An excellent, warm, day at the Ginkelse Heide.
We will remember the British and Polish paratroopers that couldn't be reached by the reinforcements. The men who felt they had no choice but to gloriously fight until the end. Young men that gave their lives for our peace.

Special thanks to Keep Them Rolling for the opportunity to join them for the day! 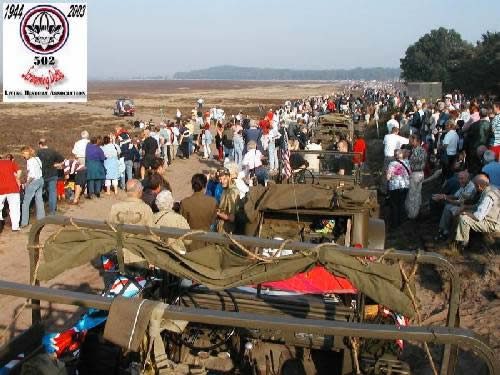