One of the most famous D-Day +1 pictures is of a young man standing in front of a wrecked Horsa glider somewhere near Ste Mere Eglise, Normandy. Double bars on the front of the helmet, Greasegun ready in the right arm.
The night before this man jumped out of the lead aircraft of the 505th Parachute Infantry Regiment followed by Colonel Ekman. It was his third combat jump.
He landed near Chef du Pont and walked towards Ste Mere Eglise with, amongst others, General Gavin.

This man is number 0-407914; Colonel Bob Piper, Headquarters Company, 505th PIR, 82nd Airborne Division.
Airborne trooper all the way up from July 1942.
The war had him travelling from the US to the UK, to the Mediterranean, Morocco, Sicily, Italy, France, The Netherlands, Belgium, Germany... An extraordinary man who chose to take his camera with him (against all orders) and provided us with some excellent pictures of a first-hand view.
A man who met the love of his life, Evelyn 'Steve' Stevens, the 'regimental' Red Cross girl during this war. Only 4 ladies were attached to the entire 82nd Airborne Division, so what were the odds to this remarkable story?

We had the privilege to meet Colonel Bob Piper during a book signing session in Arromanches, Normandy in 2002. And we have been in touch ever since. Before the December 2002 Bastogne March, Bob wrote:
'I'll be thinking of you and the others on the 21st of December 2002 when you represent the 82 Abn Div and the 505 Pcht. Inf. Regt. in the Bastogne Airborne March'. I walked most of the march in 82nd M1942 outfit.
During that March, and every March since then, I have always been thinking of Bob and the other veterans that have touched us all.

In November 2003 Bob Piper agreed on being portrayed in the WW2 Paratrooper Webbase E-nterview Section.
Hoping to meet him again in 2004; 15 questions for Colonel Bob Piper.

01. At what point did you decide to become a paratrooper?

When I went to Ft. Benning in June 1941 I saw my first paratroopers and decided that's for me. Only 1 battalion existed - no spaces for 2nd Lts. to join so I went to California for duty and came back in July 1942 - went to jump school and was an airborne jumper from July 1942 until I left the Army in February 1972.

02. Can you remember your first practice jump?

My first jump was just an ordinary experience as I'd been trained to do.

03. Going into the Mediterranean Theater of War the 505th PIR troopers had to hide the Airborne Patch and cover the jumpboots by leggings. How did you feel about that?

We didn't like to cover the airborne patch and take our pants out of our boots, but this only lasted while we went through Casablanca (Morocco).

04. After Sicily and Italy you prepared for Normandy, a veteran. Was that different?

Veteran or not - when you prepare for combat you're "all business" to be ready for anything. There is no difference.

05. Some Airborne Troops like the 401st GIR became Seaborne Troops due to the lack of Air Transport & Gliders. Been given the choice, would you have considered boarding an LST?

No LST's for me. We trained to jump and fight and that was what we expected.

06. There is a famous picture of you, standing next to a glider in Normandy. What did you do directly after that picture was taken?

I just went back to my job as the glider was empty and I couldn't help anyone.

07. If you would visit Normandy now, which place would be the first to return back to?

Back to the St. Mere Eglise area and the area where I landed and where we established the 505 CP.

08. During Market Garden you found yourself in Holland. What was your impression of our country?

Holland was neat, clean, the people most friendly and helpful. Had bacon and eggs the morning after the jump, thanks to a little old lady in Groesbeek.

09. Bastogne: an icy and snowy landscape as battleground. Did you feel you were prepared for that kind of war?

We were prepared to fight 'BUT' not for a battle in the cold and snow. We had 'NO' winter uniforms, gloves, hats etc. so the weather was also our enemy.

10. Mrs Piper and you met during WW2. She wanted to make a jump out of a C-47. Would you have given her the green light?

Steve, was ready to jump mentally and physically "BUT" if a civilian Red Cross girl had been injured, many people (commanders) would have had a tough time as she was "NOT" authorized to make a jump. Some one would have been disciplined.

During the war - any or all of the selection (in small amounts). We actually had little time, or desire to drink alcohol as long as the fighting was going on.

12. In total you made 4 combat jumps. That is unique. Each jump has it's own story. Which story is your favorite?

Sicily was my first jump and the one which was most mixed up (no pathfinders; no weather information; new A/C pilots; spread all over the island. "BUT" the first combat was what we'd trained for and meant the most.

13. What is the most precious memory you have of being a Paratrooper?

The most precious memory was the friendships, camaraderie, respect among officers and men.

14. You are still a licensed pilot. What is up there that keeps you going back up?

Piloting an aircraft is an individual challenge. You must do it well, which means good preparation; self confidence; good judgement and knowing the capabilities of the aircraft and yourself.

WWII troopers were doing something that not everyone could or would do. This set him apart and everyone would like to think he was the best fighter in the world. 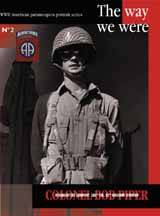