The Allies are completely surprised by the German offensive in the Ardennes. Hundreds of tanks and armored vehicles break through the lines and smash the, mostly inexperienced, American frontline soldiers. Although resistance is fierce at some locations, in a lot of vital area's the Allied troops run for their lives. Panic is roaming free. Rumors about German soldiers in American Uniforms contribute to the growing unrest, and twisted or misplaced signposts add to the chaos. Because of the continuing fog, snowfall, cold and clouds the Allied Airforce cannot support the ground force in any way.

Put in reserve at Mourmelon, France, the 101st Airborne Division receives the order to move out to the Ardennes as soon as possible; all leave & furlough are cancelled as per direct!
The Division was pulled back from the Island region in Holland where they were stationed since operation Market Garden. The troopers are all wounded in one way or another, weapons are in need of major repair and the men are looking forward to a few nights out, maybe into Paris But instead they are herded into open cattle trucks and driven in the direction of Bastogne overnight. No stops, not even for relieving themselves. Just let it flow out of one of those almost 400 moving trucks, blazing with full light through the night. HQ's fear more loss of territory, so speed is a key factor. Along the way the trucks pass places like Verdun, Sedan, Bouillon and Neufchateau. The paratroopers haven't had enough time to prepare for this 'tail-gate' jump. There is a lack of weapons (some carry only an e-tool and a knife), and a lack of proper winter clothes and food. But there is no lack of spirit!

A week before Christmas the 101st Airborne Division arrives at the designated point to stop the German offensive. Elements of the 506th Parachute Infantry Regiment prepare to defend the Noville / Foy / Bois Jacques area and join the 10th Armored Division and 705th Tank Destroyer Battalion of the former taskforces. The German attack follows and the entire 101st Airborne Division would have to deal with a month of artillery barrages, German charges, cold, fog and snow. German shells would explode into the treetops and mingle steel fragments with wooden splinters into a deadly hail. There were days the fog was so thick that every shadow could be a man or a tree. Physiological warfare with speaker messages, grenades filled with propaganda flyers and folders, and invitations to surrender for both sides. A German ultimatum that spoke of complete annihilation was answered with 'NUTS!'. A lack of food. Melting snow to get some 'drinkable water'... But all for a sole purpose: the German offensive would never control the network of roads with Bastogne as hub. 'The Battered Bastards of the Belgian Bastion of Bastogne' would hold their ground.

The 401st Glider Infantry Regiment was involved in the battle of Champs on the Bastogne perimeter. The pictures, thanks to Garmen Gisi, are showing men of the 401st GIR of the 101st Airborne Division.
Garmen was there in Champs. You will see a variety of paratroopers. Every kind of boots; jumpboots, buckleboots, infantry boots... Everything that could be 'liberated' was worn; wool knitted caps under the helmets, scarves, hoods, extra jackets.
In the snow these men are posing, not far away from the relatively safe foxholes. 'If you were able to chip yourself through the frozen top layer it was quite possible to dig a proper foxhole', a veteran recalls in his book. 'We have been digging ourselves through Europe', another one mentions. 'We became experts in the European soil'.

One of the troopers is equipped wit a Colt holster on the right hip. Another seems to carry a leather belt with a different kind of sidearm (German?). A fighting knife is strapped to an ankle. The group picture shows a helmet with a paratrooper-first-aid kit. A lot of details on these magnificent pictures straight out of history. Snapshots from Bastogne!

But what you will see most is a stubborn pride!
'What a Hell of a Way to Die!' 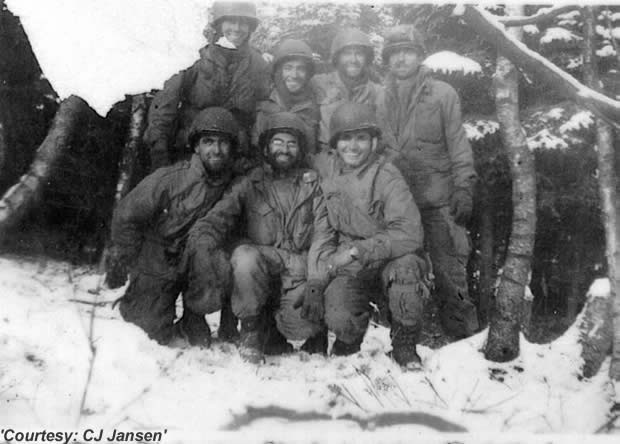 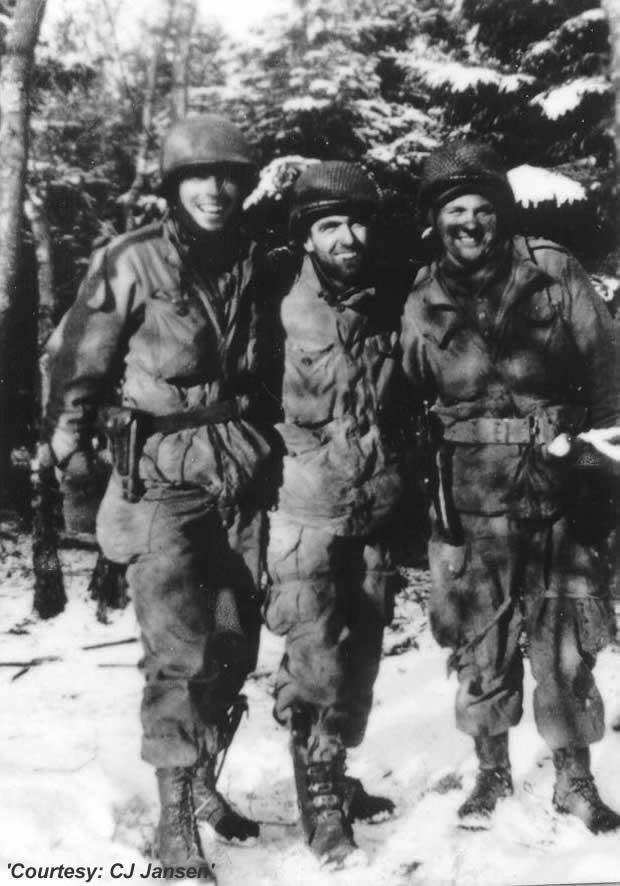 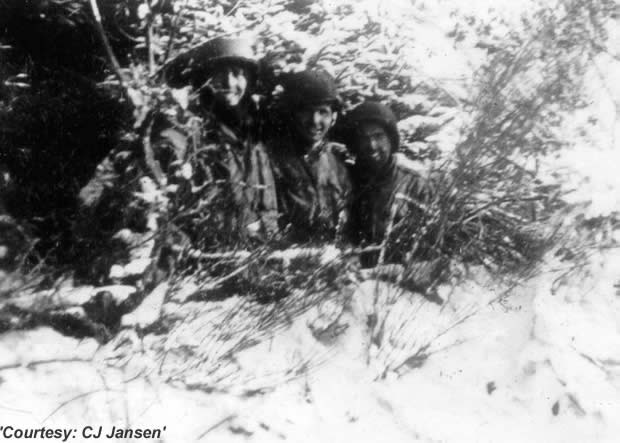